Here's Why I love "Beauty and the Beast"

By Overtired Mama - September 02, 2017
Ok, I know the live-action Beauty and the Beast movie was released months ago, so it may seem like I'm behind the ball on this one, but as I re-watched this movie, I was reminded of why I love this movie so much. 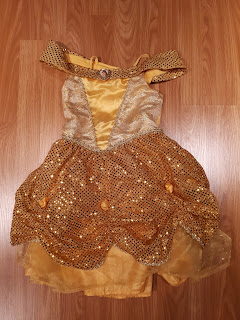 If you've read through my blog, it's easy to see that I am a Disney fan, but that's not the only reason I love this movie.  I think that sometimes Disney princesses, and fairy-tale princesses in general, get a bad rap.  They're sometimes portrayed as "damsels in distress" and they get criticized for seeking a man's help (more specifically, a prince's help) to get out of whatever trouble their in.  This brings me some of the reasons I love this movie so much, and why I think Belle is one of my favourite princesses.

Please note I am doing my best not to spoil the movie for those who have not seen it, but I can't guarantee that you will not see things that you didn't know about the movie.

1 - Belle is a polite and caring person.  As she walks through the village in the opening seen, she is faced with people calling her peculiar, strange and even rolling their eyes at her.  But she greets everyone with a smile and a polite greeting.  Please don't mistake this to think I mean we have to accept people being disrespectful to us, but I think a smile and a greeting go a long way.  Belle goes on to show a little girl how to read, even though it is not an activity that others in the village believe that little girls can do.

2 - Belle is imaginative and creative.  Not only does she imagine the world outside of her little village, but she puts her creativity to work to come up with a washing machine for herself.  Very clever!

3 - Belle recognizes there is more to a person than just outer appearance.  Gaston may be handsome (and he definitely is in this movie), but his personality is not so attractive.  While others fawn over him, Belle is not taken in by his outward appearance and recognizes his unattractive personality.  And ultimately (SPOILER ALERT) she falls in love with the Beast for who he is on the inside, not his outward appearance.

4 - Belle is brave and strong.  While initially frightened of the Beast (and who wouldn't be scared of this towering creature that has captured your father and locked him away), she is not afraid to stand up to him.  She speaks her mind and openly disagrees with him.  And it goes without saying that when she volunteered to take her father's place as prisoner, that showed the ultimate courage.

5 - The visual effects in this movie are out of this world.  The colours, and the way Disney brings the objects like clocks, candelabras and even a wardrobe to life are amazing.

6 - Le Fou.  Le Fou is sometimes underrated, but there are a few reasons I like Le Fou, and I actually prefer the version of Le Fou in this live-action version of Beauty and the Beast over the cartoon one.  Le Fou holds Gaston in high regard, as many of the villagers seem to, which even results in a song dedicated to Gaston (one of my favourites in the move).  Despite the pedistal that Le Fou places Gaston on, he also has a conscience.  As the movie progresses Le Fou makes a transformation from a follower of Gaston to someone that starts to value himself and recognizes the error of Gaston's ways.  I love this transformation.   And finally, Le Fou injects some great humour in to some darker scenes of the movie, he has some of the funniest lines in the movie.

I could probably expand my list well beyond 6 reasons that I love this movie, but I will leave it there.  If you have not seen the live-action version of Beauty and the Beast, you really should.  If you have seen the movie, do you agree with my list?  What did you think of it?  Leave your thoughts in the comments section, or connect with me on social media to let me know what you think:

​I am a total movie lover!  I like to get lost in plot lines, relate to characters, and even challenge the way I think about things.

If you are a fellow movie lover, this giveaway is for you!


I've paired up with some fellow bloggers for a "Blog Hop"!  Prizes from the different bloggers are supposed to be a movie or gift card to a movie theater, or even paypal cash so they can buy your own movies. Be sure to check each blogger in the hop for their specific prizes.

I'm giving away $20 Paypal Cash!  Please note my prize is in Canadian Funds.


The #MovieMadness Blog Hop is co-hosted by Powered by Mom and Mom Does Reviews.


Movie Madness $20 CAD PayPal Cash GiveawayOne lucky reader will win $20 PayPal Cash (Canadian Funds).Open Worldwide.Winner will be chosen at random.Sweepstakes ends February 27th at 11:59pm ET.Winner will be notified via email.Winner will have 48 hours to respond before a new winner is chosen.Overtired Mama is responsible for prize fulfillment.Must be 18 y…
Read more

Yurting It Up In Dartmouth

My daughter and I decided to do something a little out of the ordinary for a holiday this summer.  I've been working and doing a lot of school work lately, so some mother/daughter time was needed.  We are fortunate that Dartmouth and Halifax, Nova Scotia, are within driving distance, so we took off on a mini-vacay!

I like to camp, but I don't like all of the "lugging" involved in camping (tents, tarps, etc), so we decided to try something a little different.  I found Shubie Campground (visit their website here: http://shubiecampground.com/).  Shubie Campground has campsites available for those interested in tenting or bringing a trailer, but what we found that intrigued us was the yurt available on site - so as my daughter put it, we decided to "yurt it up".  It should be noted that there is only one yurt available, so be sure you book early if you are interested!

Shubie Campground is connected to Shubie Park, which has a fabulous trail system, more on that…
Read more

I've had an Instagram account for a long time, but I only just recently started to use it more.  I share content on my Instagram that's a little different than my other social media channels.  I tend to share more pictures of my travels, as well as my fitness journey - something I have struggled with.

How do you use your Instagram?  Are they similar posts to what you share on your other social media accounts?

If you've never checked out my instagram, here's an opportunity to check it out AND gives you a chance to win a prize!  I've teamed up with some bloggers to giveaway a $150 (US) Target gift card. For my Canadian readers, I know the Canadian Target folded up shop, but I know there are many  (myself included) that still enjoy shopping at Target on visits to the US.  What would you spend the gift card on if you won?