My Thoughts on the ALS #IceBucketChallenge

By Tired Mama - August 27, 2014
I was prompted to write this post after reading so many negative comments and news articles about this challenge.

This campaign is positive on two different levels - it's raised an enormous amount of funds, and it's raised awareness.  Yes, I realize there are people doing the challenge that will not donate any money, and yes, there are people that will learn nothing about ALS as a result of this challenge.  But the fact is that funds ARE being raised and people ARE learning things about ALS because of this challenge.

How unfortunate that some are saying that this disease is unworthy of our donations due to the "small" amount of people affected.  Do I realize that more people are killed by heart disease each year?  Yes.  And I still donate to the Heart & Stroke Foundation.   I will continue to support the causes that have been close to my heart.

I also donate to causes that haven't necessarily affected my family, but I think they're important (soup kitchens, food banks, etc).

I consider myself a pretty intelligent person, and I believe that I have carefully considered a lot of information before I've donated to various causes.  I, personally, don't need the media to tell me who I should and shouldn't be donating to.  I know there are hundreds, if not thousands of extremely worthy causes out there, and I donate what I can, where I can, when I can.  People shouldn't be criticized for the causes they choose to support.  As fundraisers it's important to communicate why it's important to donate to the cause(s) you're raising money for.  I think criticizing other causes to convince people to donate to another is not the right way to go about it.

As for the "wasting water" argument.  I sincerely hope that none of the people making that argument have ever done any of the following:

There are lots of ways we waste water as a society.   I'm not saying that we should ignore wasting water, however, I would hazard a guess that more water has been wasted doing the above activities than has been wasted in this challenge.  And, if you are concerned about wasted water, or societies that don't have access to clean drinking water, I encourage you to get involved in clean water campaigns (Free The Children, WaterCan, The Water Project and Charity: Water are just some examples of the clean water campaigns that exist).

Bottom line - I realize that our Facebook newsfeeds may be inundated with these videos at the moment, but, my newsfeed has been inundated with game requests, cat pictures, "share this picture/status" contests and many other things before.  I would much rather see positive things like this.  No one says you have to watch the videos.  Scroll on by, ignore if you must.    If you're passionate about a different cause (cancer, heart disease, mental health, or something else), then do what you can to promote it.  It takes innovation and passion to come up with awareness campaigns.  I've been fundraising for many years, and trust me when I say it's a hard job.  Anyone who's ever had to do any kind of fundraising, large or small scale, knows it's challenging.  That's why, instead of criticizing the efforts of people participating in this campaign, I choose to applaud their efforts.  There's already so much negativity in society today, why does an awareness/fundraising activity for a terrible disease have to be a part of that negativity.  Take it for what it is and if you don't agree with it, don't donate, don't watch the videos, but don't put down others for supporting the cause.  My wish for those "annoyed" by this challenge is that they can take their "annoyance" and turn it in to a positive by allowing it to motivate them to raise money/awareness for a cause they are passionate about.

I'm not telling you to donate or not to donate.  That's a decision everyone needs to make on their own.  I encourage everyone to read up on organizations and donate to those that they want to donate to.

I will close with a little screenshot of my own "ice bucket challenge" video.  Please consider visiting www.als.ca and read up on the disease and the wonderful work this organization does. 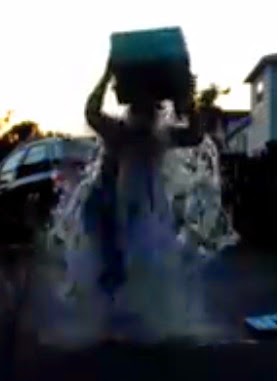 Share your thoughts in the comments below!
Rants Serious