Now back to Big Brother....

We pick up where we left off at the HOH challenge.  And, as I indicated last time, I think this challenge really shows you who is on which side of the house.  And despite what Arlie thinks... throwing the competition also shows what side he is on.... and Sarah knows it.

In the end Heather wins HOH.  I look forward to watching Sabrina and Rachelle suck up to her, given how horrible they've been to her at this point.  She shows everyone her HOH room and Rachelle rolls her eyes and sits with a sour look on her face as Heather reads her letter from her boyfriend.  We also get a little clip from the diary room about how much she doesn't like that Heather won.  Well Rachelle, bitter is not a good look for you.  Suck it up, buttercup.   We also see Kenny say he doesn't understand why she's crying over the letter because she's only been in there a month.  Wait. Pause.  Is this not the guy who has cried the last few times other HOHs read their letters?  And who could forget how upset he was when Ika shredded the letters from home: 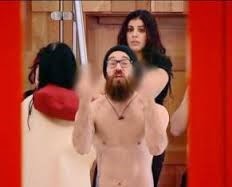 So don't act like she's being ridiculous!  As much as I loved Kenny in the beginning... his alliance with Andrew and recent behavior are really turning me against him.

Then Heather picks people to be on slop.  Rachelle, Kenny.... then Sabrina avoids eye contact and looks terrified hoping she won't be chosen... and.. it's her lucky day because Sarah volunteers.

Big Brother tells the houseguests to pack their things.  Everyone panics assuming it's instant eviction time.  And Sabrina blurts out that she voting Rachelle out if she's nominated.  Ouch.  She regrets saying that when it turns out it's actually just a "sock puppet challenge".  They are put in to pairs and have to create a sock puppet "look-a-like" for their partner and speak as though they are that person.. using the sock puppet.  A number of people go out of character.  And we see Rachelle mock Heather in her impression (surprise, surprise).  Then it's revealed that Houseguests will have one item removed for every time they went "out of character".  Most people broke 4 or 5 times... except Sabrina, who broke 21 times!  Seriously!?  You are terrible at challenges girl.

Now we see some negotiating happening... Kenny is scrambling and hoping people won't nominate/vote for him.  He goes to Jon... who has approached Kenny with deals in the past and been turned down... good luck with that one.  Then he "thinks he's reaching" Heather.  No, no you're not.

Remember when no one wanted to be put on slop?  Well thanks to Rachelle, everyone is on slop.  Despite the amount of times she rolled her eyes in Heather's HOH room, she ate some of her candy.  A big "no-no".   And as a result, everyone's on slop for 48 hours.  Rachelle cries, and no one really feels sorry for her.

Ultimately, Kenny and Allison are nominated (Allison as a so-called pawn).  But, who knows what will happen with the POV and the secret POV that Arisa mentioned during one commercial break.  I guess we'll find out Wednesday.
Big Brother Canada 2