By Tired Mama - March 13, 2014
As always, we begin tonight's episode with a recap of what just happened at the end of the previous episode - specifically, Paul calling Andrew sexist and racist.  Yikes.  We see several people jump up, some yell, some just sit in silence ( the look on Adel's face is priceless).  Then Paul heads to the bathroom where he does a little monologue to indicate this was all part of his plan.  Really?  Because I feel like you're just trying to "save face"... but even if that's true... your plan is terrible.  Probably one of the worst plans I've ever heard.  I'm pretty sure accusing someone of being racist and sexist is not a good way to win the game...   He said he has to be "the bad guy" for a bit.  Yeah, the "bad guy" thing worked for Dr. Will (remember the "I hate you all" speech?), but this is different.  It's not like you were just saying you don't like him... you accused him of being RACIST.   Particularly telling was the exchange between Ika and Paul:

Oooohhhh well then, that's a good reason to call someone racist.

So the drama carries on for a bit, so Big Brother decides to tackle the situation head-on, by forcing the houseguests to do a team building activity.  Ah yes, team building... those two words that every office worker shudders at when it's mentioned for a staff meeting.  So it involves houseguests guiding blindfolded houseguests around the house and having them clean while blindfolded.  Ahhh... I see what you did there Big Brother.  The house was gross.  I mean so dirty.  Here's an example (keep in mind, this screen shot was from the live feeds the first day they were live): 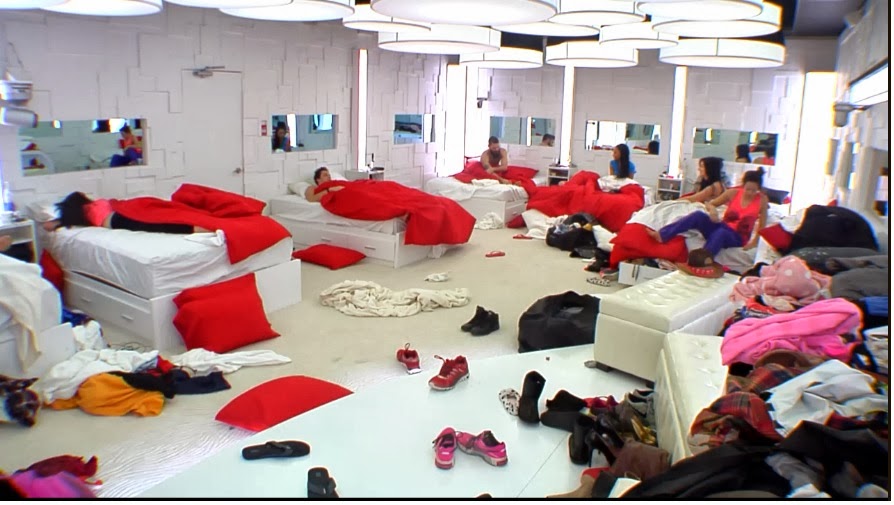 And all bedrooms are just as messy.   So I guess this was one way to get the houseguests to clean up their mess, since they don't seem to interested in doing it themselves.  I think the highlight of this activity was watching Kyle fix his hair and check himself out while he was "helping".

So everyone says how fun it is blah blah blah.

On to the POV competition.  Turns out everyone competing in the competition gets a preview of the movie Divergent.  I'm not going to lie... I'm jealous.  I would like to see it too.

Anyway, they watch the movie, and cue all of your typical movie comments "special effects were awesome", " great plot", etc.  My favourite though, was this comment: "The similarities between this movie and the Big Brother house are incredible".  Um yeah, I don't know how many of you read the book, but *spoiler alert*, people are trying to kill each other.... so obviously that was meant figuratively, or there's some pretty serious drama that they're not airing on the show.

Flip over to the other side of the house... aka... the 3 potential houseguests.  They get a glimpse in to the drama that Paul started... they're all shocked.  Then Big Brother gives them an hour to choose a costume and think about what they will say to Canada to  encourage viewers to vote them in the house.  They stress about their costumes.  Newsflash... I don't really care what you're wearing... rest assured, you could have the most clever/awesome costume ever... but if you are annoying or some kind of jerk, I'm not voting for you.

In Allison's message, she said she's been watching the show since she was 11.  Yikes.  I feel old.

Scott dresses in drag and gives a shout-out to Saint John.  I love it.  Although, I'm reading a lot of people getting a hate on for him because people feel that Big Brother is "favouring him".  I'm not really sure what that means.  I haven't analyzed how much he's been on screen compared to anyone else, so I guess I don't know.

And Nate... he seems nice enough, just not sure he's a "grab your attention" kind of guy the way Allison and Scott seem to be.

So POV challenge... you have to face your fears.  Paul is scared of heights.  As much as I dislike him in this episode... I can relate.  Nice of Kyle and Adel to come over and encourage him as well.  That will be the extent of my praise for any of these people for tonight's show.

So the winner is..... we have to wait.  Big Brother decides to go the "cliffhanger" route and make us wait until the next episode.

What do you think about tonight's episode?  Who's going home? Who's going in the house?  I guess we'll find out!