By Tired Mama - April 05, 2012
I know, I know, no one every wants to read "downer" posts, but, I've never really posted on this topic before, and I think it's important. 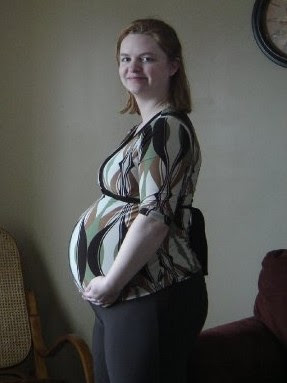 It was around this date in 2009, when I was VERY pregnant (due April 10th to be exact), that I began ignoring some pain I was having in my lower ribs.  I shouldn't say I was ignoring it, because it was difficult to ignore, it was quite painful.  I hadn't had any problems with my pregnancy other than 1 doctor's appointment that week where my blood pressure had been high.  When the doctor took my blood pressure, she suggested we wait 15 minutes and try again... so we did, and it was "normal" again. (I will explain why I put that in quotations a little later).  At that time, my doctor said to me "if you experience any pain in your ribs, head up to the hospital and we'll look at your blood pressure again".

That week, I did start having pain in my ribs, but ... it's difficult to describe... but it didn't feel the way I thought "rib pain" would feel... it was low in my ribs, almost in my stomach... and it almost felt like indigestion, but much more intense.  So when I would feel that way, I would have a bath or lay down hoping the pain would subside.  What I didn't realize is that the "normal" blood pressure I was experiencing, was actually not normal for me.  Before my pregnancy, I didn't pay any attention to my blood pressure, so I had no idea what my blood pressure usually was, so, during my pregnancy, when my blood pressure was in the normal range (optimal is about 120/80), I didn't worry about it.  It slowly crept up over the next week or so, and by the time my due date rolled around, I was in the "mild hypertension" range (about 150/95), when April 12th came (Easter Sunday), I had alot of pain, I was dizzy, and my blood pressure had risen to about 170/100.  I was nervous to go to the hospital out of fear of being "that over reacting pregnant lady", but when my blood pressure reached 220/110, I went.

When we arrived at the hospital, they took my blood pressure and sent me up to Labour & Delivery "out of precaution".  We were there for about 6 hours, had my blood pressure taken lots of times, spoke to a couple doctors, and then the resident came in and said "well, I think we're going to send you home, but if the pain comes back, just come back up.  I'm just going to consult with one other doctor first".  She left, I started to get ready to go, then she came back in and said "we're going to induce you, we're a little concerned about your blood pressure".  I was surprised, but went with the flow.

I started on IV, they broke my water, and labour started at about 12 AM.... I won't go through the long process... but they monitored me the whole time.  My beautiful baby girl was born at about 7:15 on April 13th.  When she was born, I was tired, but happy she was here.  After all the nurses and doctors were done checking us over, a student nurse came in to help me to the shower, and I was left to shower.  My husband and I were alone for a long time, when finally a nurse came in to wheel me down to my room.  When I got there, I knew something was wrong... I wasn't feeling bad, but there seemed to be a lot of nurses and doctors around.  The doctor told me that my blood pressure was still a concern, and they had done some blood work and my platelets were going down (for those who don't know, platelets help your blood clot so you don't bleed a lot).  So I was going to have to stay in bed, no getting up for shower, bathroom, baby... nothing.  No lights on in the room. No visitors (my husband was allowed in).  I had to have a nurse with me 24 hours a day.

In the end, I had 7 platelet transfusions that helped save my life.  I found out later that I had Class I HELLP syndrome.  Had I ignored the symptoms any longer, I likely would not be here.

For more information about this condition, please visit: http://www.preeclampsia.org/health-information/hellp-syndrome.  This condition can be fatal, so it was a scary experience for all of us.

So why am I writing about this?  Not to scare anyone, I am hoping that by sharing my story I can encourage women who are concerned about how they're feeling in their pregnancy to seek help.  I am happy to chat with anyone that has questions or who would like to share their own experience.  Email me at katie.overtiredmama@gmail.com.
Being a Mommy Serious